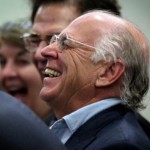 Jimmy Buffett testified before the Nevada Gaming Commission Wednesday where he was recommeded for a Gaming license in Nevada.
It was interesting to learn that “Margaritaville” was originally offered to MGM Grand but they declined. Margaritaville-Vegas opened in the Flamingo casino in 2003 and they added a Margaritaville Casino in 2011.
The 45-minute appearance before the control board by Buffett and company officials Wednesday was a combination of official business, celebrity interview and story-telling session that fell between concert appearances in California.  Read more.