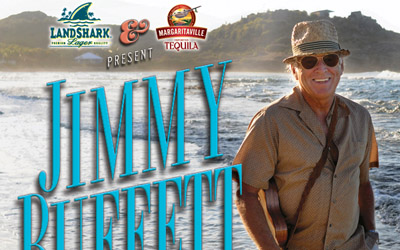 On Labor Day weekend, Margaritaville and Southern Fried will meet Chocolatetown. And the result should be one of the biggest music events in the 75-year history of Hersheypark Stadium, 100 W. Hersheypark Drive, Hershey.

Live Nation officials in Philadelphia traveled to Hershey Monday to announce that Jimmy Buffett and the Zac Brown Band will headline the Southern Ground Music and Food Festival at Hersheypark Stadium on Saturday and Sunday, Aug. 30-31.

Joining Buffett and his Coral Reefer Band on Aug. 30 at 8 p.m. will be country-music star Alan Jackson.

With the Zac Brown Band on Aug. 31 — time to be announced — will be Blues Traveler and Trombone Shorty.

The festival is big news for central Pennsylvania parrotheads — as Buffett’s followers are called — who’ve been waiting forever for the Margaritaville Man to come here.

“He’s been in concert all over the world, but he’s never been to Hershey,” said Dave Niedbalski, vice president of marketing for Live Nation, based in Philadelphia.

Another first for Hershey is the Southern Ground Music and Food Festival. Officials said this will be the first time it has been held north of the Mason-Dixon Line. The festival is also held in Nashville, Tenn., and Charleston, S.C.

“Hershey has become a giant concert destination,” Niedbalski said. “From Mixed Tape Festival to Farm Aid to the Southern Ground Festival, we love working with Hershey and bringing the best talent to Hershey.”

Buffett, of course, is known for hits like “Margaritaville,” “It’s Five O’Clock Somewhere,” “Cheeseburger in Paradise” and “Come Monday.”

The Zac Brown Band has scored eight No. 1 country hits since 2008, including “Knee Deep,” which it recorded with Buffett.