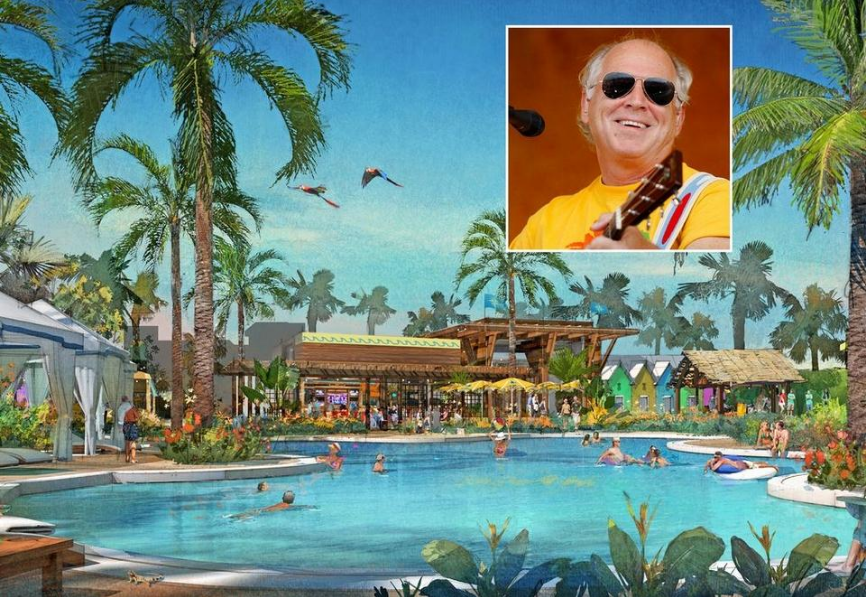 This is a rendering of the town center that will be part of Minto Communities’ planned 6,900-home 55-and-older Latitude Margaritaville, Daytona Beach community. (Inset: Jimmy Buffett). [Image courtesy Minto Communities]

DAYTONA BEACH — Jimmy Buffett fans in search of a real-life “Margaritaville” will soon be able to find it, just not in Key West.

It will be right here in Daytona Beach.

Canadian developer Minto Communities announced that Buffett’s Margaritaville Holdings company has agreed to become a strategic partner in developing its planned 6,900-home community for residents 55-and-older on the north side of LPGA Boulevard, just west of Interstate 95.

The first homes are expected to be ready for move in by fall 2018, said William Bullock, a senior vice president with Minto.

The new deal is a “game changer for this area,” said John Albright, the CEO of Daytona Beach-based Consolidated-Tomoka Land Co., which recently sold the land where the first phase of the Latitude Margaritaville, Daytona Beach is planned. “It will make the Minto development something that people identify with nationally.” 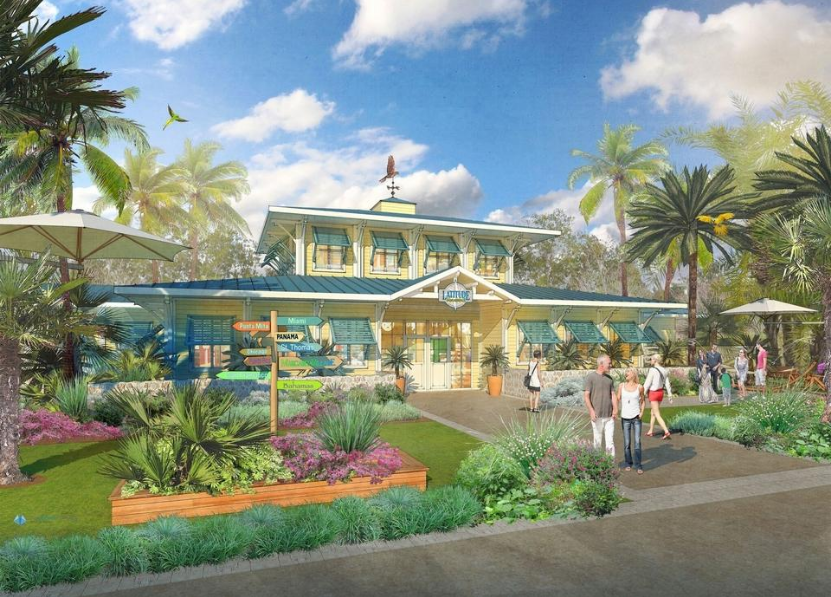 The community, which originally was to be named Oasis Daytona, will now be called Latitude Margaritaville, Daytona Beach, and will be designed to reflect the lifestyle espoused in Buffett’s songs throughout the development.

“With Minto’s expertise in creating master-planned developments and Margaritaville’s inherent ability to deliver fun and escapism, Latitude Margaritaville has the exact coordinates for those looking to live the Margaritaville lifestyle as they grow older, but not up,” stated John Cohlan, the CEO of Palm Beach-based Margaritaville Holdings, in the news release.

Buffett and Cohlan are the majority owners of Margaritaville Holdings, whose operations include destination resorts/hotels across the Southeastern United States and Caribbean, four gaming locations, and more than 60 food-and-beverage locations.

“Daytona will be the first of several communities we’ll be developing in partnership with Margaritaville Holdings,” said William Bullock, a senior vice president with Minto, in a phone interview.

“Music, food and beverages will be a big part of the community,” Bullock said, adding that the community’s town center will include a music bandshell and “Margaritaville-inspired food and beverage offerings” among its amenities, which also will include a fitness center, indoor lap pool and spa, and an outdoor resort-style pool. “We’re definitely going to do some live broadcasts from there (Latitude Margaritaville, Daytona Beach) on their SiriusXM Channel,” he added, although he did not know who those performers might be.

Bullock said he was told by Margaritaville Holdings officials, “You never know when or where Jimmy Buffett may show up to do a concert.”

The community will also operate for its residents a private oceanfront beach club in Ormond-by-the-Sea that will be accessed via a loop shuttle bus.

Latitude Margaritaville, Daytona Beach is expected to be the biggest master-planned community ever built in the Volusia-Flagler area.

Bullock said while his company is initially looking to develop between 6,000 and 7,000 homes, “there’s still an opportunity grow the community” even further by acquiring additional adjacent land from Consolidated-Tomoka, which recently completed its sale of nearly 1,600 acres to Minto for $27.2 million. That land, on the south half of the planned community, is where Minto will be developing the project’s first phase of up to 3,400 homes, as well as a neighborhood retail center along the north side of LPGA Boulevard, just west of the Tomoka River.

Margaritaville Holdings is currently in talks about the possibility of becoming involved in the neighborhood retail center, Bullock said. The 200,000-square-foot retail center is expected to include a grocery store as well as restaurants and shops and would be next to the south entrance of the gated “golf cart-friendly” community, he said.

The town center would be centrally located within the community’s first phase and is intended to be used exclusively by its residents, although it could potentially be open to the general public for special events, Bullock said.

The community is being designed to reflect the Margaritaville lifestyle, including the look and feel of its homes, which will feature an Old Florida/Key West architectural style, Bullock said.

The company expects to sell and build an average of more than 300 homes a year at Latitude Margaritaville, Daytona Beach, Bullock said, adding that the pace of sales could be even faster thanks to the “national exposure” its connection to Buffett is expected to provide.

“The concept for the community is Margaritaville equals fun,” Bullock said. “Having fun, socializing, enjoying the lifestyle because you’ve earned it, you’ve been waiting your whole life for it and now you’ll be able to celebrate it with food, fun and music.”

Bullock said the community will be the site of concerts, special events and parties “throughout the year, all targeted to an active 55 and better lifestyle.”

It could also potentially host pickleball tournaments. Bullock said Minto is the title sponsor of the annual U.S. Pickleball Open event held in Naples, that last year was broadcast by CBS Sports, and is in talks with the event’s organizers about holding competitions at Latitude Margaritaville, Daytona Beach, as well.

Construction of the sales center for the community is on track to open this fall, along LPGA Boulevard, next to the Halifax Humane Society. “We expect to open our models in the beginning of 2018 with early fall 2018 for the first occupancies,” Bullock said.

In addition to being the project’s developer, Minto will also be the builder of the homes at Latitude Margaritaville, Daytona Beach. Bullock said his company intends to extensively employ local firms as subcontractors. The company recently held a “trade partner introduction luncheon” at the clubhouse at LPGA International where more than 130 people representing firms interested in becoming subcontractors attended.

“The response exceeded our expectations,” he said.

Long before he was a brand, Jimmy Buffett launched his career in the 1970s as a free-spirited troubadour who had migrated to Key West after a failed attempt to become a country songwriter in Nashville, Tenn.

“Margaritaville,” the song that defines his musical career and product spin-offs from restaurants to TV dinners, was released on the 1977 album “Changes in Latitudes, Changes in Attitudes,” and reached No. 8 on the Billboard Hot 100 chart.

By the 1980s, Buffett’s hits faded and he expanded into other business tie-ins, launching his Margaritaville line of clothes and opening the first of his Margaritaville clubs in Key West. He also published best-selling fiction books.

Buffett has said in past interviews and concert performances that he was inspired to write his hit song “Fins” after visiting a bar in Daytona Beach. The song is about males circling like sharks around an attractive woman.