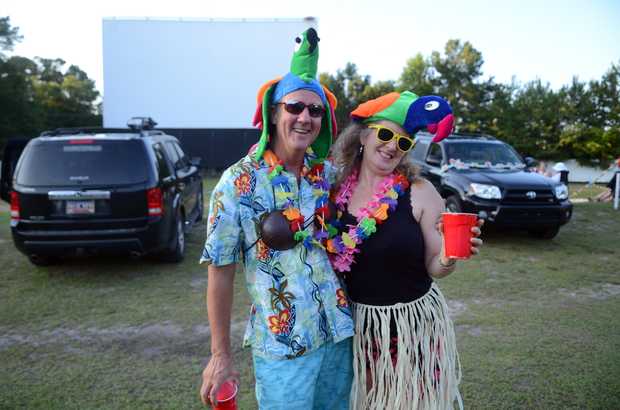 The drive-in was one of many across the country simulcasting the Jimmy Buffett and his Coral Reefer Band concert “Live At The Drive-In.”

Although the flip-flop wearing musician was not present in the flesh, he was in spirit as carloads of Parrot Heads, as his hardcore fans are known, packed the lot ready for a good time and some good music.

“Jimmy Buffett concerts are all about the party beforehand,” said Janet Gredler of Bluffton, who wore a grass skirt and a parrot hat she ordered online just for the occasion. “I’ve been in third-row seats at one of his concerts and left to go join the party in the back.”

For many Lowcountry Parrot Heads, the drive-in concert is the closest they can get to the musician.

Although Buffett tours consistently, his concerts usually sell out in minutes.

“It’s been a many years since he’s been to the Hilton Head area,” said Laura Rahn of the Savannah Parrot Head Club. “That’s why we are so thrilled about this.”

Of the club’s 100 members, Rahn estimated about a dozen were perched at Thursday’s drive-in show.

As any true Parrot Head will tell you, Buffett fans party with a purpose, said club president Bill Eiser.

It’s not all music and rum drinks, though. Most clubs also participate in regular volunteer work, he said.

“But we get a recovery day in between,” added secretary Janice Lynn, who was carrying a drink and sporting a homemade, Buffett-themed hat decorated with mini flip flops, concert pins and chips from a Margaritaville casino.

A few cars down, Randall Horres of Charleston was busy wrapping his car in rainbow garlands and lighting tiki candles with his daughters, Hannah, 11, and Sarah, 9. Children of Parrot Heads are called Parakeets.

“Hannah has a Jimmy Buffett playlist that she plays all the time in her room,” her dad said. Sarah wore a pair of tiny parakeet wings.

It can be hard for those Parakeets to leave the nest.

Even children well into their 20s and 30s can still be considered Parakeets, explained Mike Griffin, a veteran Buffett fan from Aiken. Griffin’s tailgate set-up was one of the most elaborate, decorated with blow up monkeys, a stuffed parrot in a cage, a straw umbrella and a grass skirt hanging from the car bumper that framed his Parrot Head license plate.

“There are about 8-to-10 steps to becoming a mature Parrot Head,” Griffin said.

The biggest is overlooking the commercial aspects of Buffett’s expanding Margaritaville brand and enjoying the music, he said.

In addition to selling more than 26 million albums, the singer has successfully built an empire of restaurants, casinos, a clothing line and a signature beer.

But being a Buffett fan isn’t about buying into his brand, Griffin said.

“It’s about bonding with your fellow man and having a good time. You do it for you.”