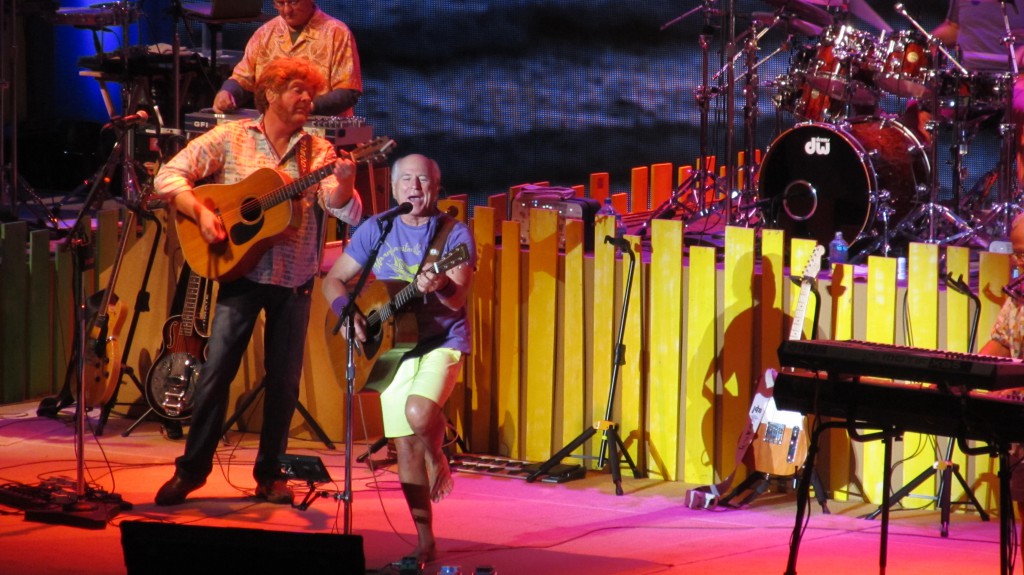 HuffingtonPost.com has a good review of Jimmy Buffett’s last concert stop of the 2014 “This One’s For You” tour:

Yet another Jimmy Buffett tour is now history. And the penultimate gig happened last weekend in Berkeley.

“For those of you who have chosen not to grow up,” Buffett said from the Greek Theater stage on Thursday night (which qualifies as the weekend in his world), “Boy, did you come to the right place tonight.”

And the crowd was there to have a ball, wearing fins and parrot heads and swimming like sharks.

Buffett set an irreverent tone from the start. “This is as close to a religious number …as you’re gonna have this evening,” he said. “…This is a very serious religious song called ‘My Head Hurts, My Feet Stink and I Don’t Love Jesus.'”

As someone who actually saw him on his “A1A” tour of ’75, I can attest that this song, more than the others, captured the original spirit of Buffett’s early concerts, back when his catchy blasphemy made him seem a bit like Florida’s Kinky Friedman or Country Joe McDonald.
For this stop on his tour, he emphasized his considerable history in the San Francisco Bay Area, displaying video footage of the Herb Caen Pier as he played “Changes in Latitude, Changes in Attitude,” showing footage of Travis Ishikawa’s recent walk-off homer and even donning a San Francisco Giants jacket later in the show.

“This is a song that…was actually written in a Holiday Inn on Mt. Tamalpais,” he said, introducing “Come Monday.”

And the crowd needed no prompting to sing along as he crooned, “Headin’ out to San Francisco…”

But then, in true Buffett style, he revised the next line: “For the World Series baseball show.”

The crowd ate it up.

Buffett, in bare feet and shorts, came on with a 12-piece band that played against a video screen showing a constantly-shifting series of images: cheeseburgers during “Cheeseburger in Paradise,” a tie-dyed t-shirt during “Scarlet Begonias,” etc.

Musically, one of the highlights was “One Particular Harbor,” sort of his “Graceland”-ish world music foray, but the true crowd-pleaser was saved for the encore.

“I’ll sing this love song for you,” he said, launching into “Why Don’t We Get Drunk,” revising the lyric at one point to: “If you brought your children to the show/And now you’re shocked/I’ve got a better verse for you/Why don’t we get lunch and snooze?” (Or at least it sounded like “snooze”!)

And then, as he sang the finale, “Lovely Cruise,” each band member, one by one, departed, leaving him alone on stage.

I hadn’t seen Buffett since I was a teenager in Florida, so it was amazing to see how he’d developed and his vast new audience, which enjoys every note he plays and has rituals that turn the place into a big party.

I first saw him in the fall of ’75, when his latest single was the humorous “Door Number Three.” I was a freshman at The University of Florida at Gainesville, sort of the Berkeley of Florida, where he’d perform free outdoor shows every now and then.

Back then, joints would be passed to the stage as he’d sing “Pencil Thin Mustache” and fans would sing along to risqué lyrics like “I don’t love Jesus.” In the Bible belt, in ’75, it all felt so forbidden!

This was during his fabled Key West period, in the heyday of the original Coral Reefer Band, which rocked in its way in its day.

With the release of the “Havana Daydreamin'” album in ’76, the free gigs got shorter, the crowds started getting out of control. He was in the process of coming up with a new song and album that would make him so popular that his next show in Gainesville would be behind a paywall. At the campus gym. Sold out.

The new album, released the next year, was “Changes in Latitudes, Changes in Attitudes,” and the first single, “Margaritaville,” was a game changer for him.

I couldn’t get tickets to his ’77 concert, so I did what I always did back then: I went to the gym four hours before the Saturday show to work out, then I went to a bathroom stall and sat there for two hours until concertgoers were let into the hall.

Around showtime, I’d simply walk out of the bathroom and into the arena, just like any other concertgoer. (This is how I got to see primo shows by Heart, Crosby & Nash and many others in ’77!)

From my bathroom stall that evening, before I walked into the arena, I could hear the sound check, which consisted of two songs: “Changes in Latitude” and “Margaritaville,” in that order, which is exactly how he’d open the concert an hour or so later.

“Margaritaville” was not yet the phenomenon it would become; the title track, at the time, was more prominent. I remember he set a beautiful mood with “Don’t It Make You Wanna Go Home.”

But I recall it just wasn’t as fun as those early outdoor gigs. The novelty numbers were missing, and so was the spontaneity — and the pot! I’m not sure I stayed to the end.

That was the last time I’d seen him — until last Thursday night. And I sure did stay to the end of this show in Berkeley! Everybody, including me, left the theater smiling.