Jimmy Buffett’s ‘Margaritaville’ Is a state of mind, and a business empire 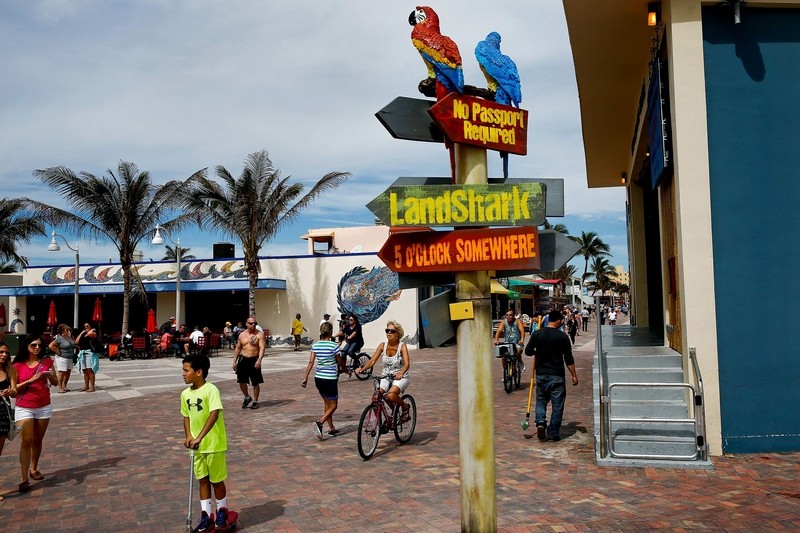 His newest showstopper — a 17-story hotel near Miami — has three pools, a full-service spa and eight restaurants, including a seriously upscale steakhouse. That electric blue sculpture in the lobby? You’d swear it was by Jeff Koons.

Over near Orlando, work has started on his $800 million family resort, which will include a 12-acre water park and 1,200 homes priced at up to $1 million apiece. His company, which had $1.5 billion in sales last year, is introducing a line of jewelry. He has one of America’s fastest-growing craft beers. A team — led by a former Google executive — is working to transform his digital media business.

The man is Jimmy Buffett. And it’s time to toss whatever you thought you knew about his lazy, hazy Margaritaville out the window.

Forget the ville. This is a Margarita World.

“People are always shocked when they find out how big we’ve gotten,” Buffett said recently. “We just kept quietly doing our thing. Not saying much. And now — bam! — here we are.”

Margaritaville, with its themed restaurants (erupting volcanoes, boat-shaped booths), started as a tropical cousin to T.G.I. Friday’s. Through trial and error, Buffett and a partner, John Cohlan, have since expanded Margaritaville Holdings to include four booming divisions: lodging, alcohol, licensing and media. Now, as they pursue growth for the first time overseas, where Buffett has a much softer fan base, they are trying to recast Margaritaville as a broad, aspirational brand — the Ralph Lauren of leisurely escape, if you will.

“The stroke of genius was making Margaritaville a feeling, not a place,” said Mindy Grossman, CEO of the home-shopping behemoths HSN and Frontgate, where 400-plus Margaritaville items include a $799 hammock and $159 penny loafers. “If you don’t take the name so literally, growth could be endless.”

Buffett, patron saint of the untroubled, has long been known for his business acumen. In some ways, with his approach to concert merchandise and tour sponsorship in the 1980s, he created the model of musician-as-entrepreneur that managers for artists like Madonna and Dave Matthews have pursued more recently. Other singers have parlayed their personas into business empires but none are as singularly sprawling as Buffett’s Margaritaville.

“He understands his brand, which has a substantial reach,” billionare investor Warren E. Buffett, a friend but no relation, said. “One of the secrets to his success is that he never really loses any fans.”

Still, a thriving brand needs to steadily recruit new devotees, and that may be Margaritaville’s biggest challenge. While Buffett’s fan base includes young people — drunkenly singing along to “Margaritaville” in a college bar is practically an American rite of passage — his core followers are baby boomers. How does Margaritaville make itself more relevant to people in their 30s? What fuels sales of those licensed products once Buffett, 69, has warbled his last warble?

It’s a subject that Cohlan, who is Margaritaville’s CEO, was not especially keen to discuss. Asked about how the company thinks about a future without its public face, Cohlan said, “Jimmy Buffett is an American treasure,” and changed the subject.

A more robust media presence beyond Buffett seems to be one answer. Last year, Cohlan expanded the company’s digital media efforts, which already included a SiriusXM satellite radio channel. He hired Laura Lee from the Google ranks, where she was a senior executive at YouTube, and charged her with building a digital content studio, improving Margaritaville’s social media presence and introducing mobile games. (One casual game coming in July will have users searching for their lost shaker of salt.)

The goal is a fully formed ecosystem. Last year, an estimated 15 million people ate at one of Buffett’s 67 restaurants or stayed at one of his seven hotels and time-share resorts. The company also wants the masses to buy Margaritaville food at their local grocery store (items like iced tea, frozen shrimp and tortilla chips are on shelves), watch Margaritaville-produced videos on their phones and maybe even sleep on Margaritaville bedsheets.

Lee’s efforts could also lead to more traditional TV programming. A model is Vice Media, which began as a hard-partying video company and went on to sprout an HBO series and Viceland, a Disney-backed cable channel. Not by coincidence, Margaritaville in 2014 sold a minority stake to the Raine Group, a merchant bank known for its investment in Vice and ties to the William Morris Endeavor talent agency.

Fittingly, the Margaritaville empire started with a nap.

The year was 1996, and Cohlan, then working for the corporate raider Nelson Peltz, known for targeting companies like Snapple and Arby’s, had gotten to know Buffett’s wife, Jane, on the Palm Beach, Fla., society circuit. One day, Cohlan turned up at the Buffetts’ home to talk about the potential growth of Margaritaville, which was then just a popular song — released in 1977, it peaked at No. 8 on the pop charts — and a two-restaurant chainlet.

But the singer was asleep.

“Had it not been for Jane, who went to wake Jimmy up, this extremely successful partnership might not have happened,” said Richard Plepler, chief executive of HBO, who knows both men.

Buffett opened his first Margaritaville restaurant in 1987 in Key West, Fla. It found instant success — so much, in fact, that he opened a second location in New Orleans in 1993. But the sequel was a relative dud, and Buffett applied the brakes, rebuffing an offer from Walt Disney Co. to build a lavishly themed Margaritaville at a Walt Disney World shopping mall.

Enter Cohlan. He had recently experienced the Parrot Head phenomenon for himself — their wild tropical clothing, their endless tailgating — and had an epiphany. “All I really knew before I went to that concert was that girls would put on halter tops and play his songs when the weather turned nice,” he said. “When I saw him perform, I said to myself, ‘Whoa. Holy you-know-what. This is a brand.’”

Buffett took on Cohlan as a partner, and together they began to expand Margaritaville, beginning at the Universal Orlando Resort, which at that time was owned by Seagram. Buffett recalled how he told Seagram during negotiations that he had one final request: “Can you just tilt that bridge a little so that people leaving your park literally roll into the front doors of my restaurant?” Cohlan and Buffett cracked up recalling the look on the Seagram team’s face.

Just before the Orlando opening, Cohlan played hardball with Seagram over a liquor matter and inadvertently started a new line of business. Seagram, which also owned Buffett’s record company then, had introduced Parrot Bay rum, which Buffett felt co-opted his band’s Parrot Head imagery. Cohlan — quite seriously, this time — told Seagram that Margaritaville would boycott its alcohol.

In a matter of weeks, Margaritaville had its own tequila and beer brand.

The theme park Margaritaville has been a runaway hit since opening in 1999. Last year, according to Cohlan, the restaurant generated about $22 million in sales. Something about Buffett’s mellow, unchallenging persona seems to make parents feel OK about tying one on with their children in tow. “Believe me,” Buffett said, “I didn’t know I was going to end up as family entertainment, either.”