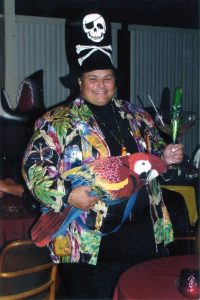 The Palmetto Parrot Head Club is saddened by the loss of member Stan “The Man” Bowen on Thursday, December 15th.

To say that Stan was a PPHC member doesn’t paint the whole picture and Stan was quite the picture. Stan was a PPHC founding father. He served multiple terms on the PPHC Board With Directors and participated in nearly every PPHC function for more than 15 years. More than anything Stan was the PPHC’s Chief Ambassador. His colorful outfits, oversized drinks, and outgoing personality made him well known across the United States. When Parrothead’s around the country heard “Palmetto Parrot Head Club” they inevitably talked about Stan.

The pirate top hat, the wild Hawaiian shirts, and the ever present maracas shaped the persona but his lovable personality was what drew people to “Stan The Man”. Parrothead’s from everywhere knew of “Stan The Man”. As Stan would tell you he was “The Man-The Myth-The Legend”. People wanted their photo taken with him. Trop rock bands happily let him join them on stage to let him do a little shimmy and shake his maracas. [See photos below]

Stan The Man’s persona grew larger over the years. There were articles written about him. Laidback Larry wrote a song about him. Stan The Man even drew the attention of the top Parrothead himself Jimmy Buffett performing with him on stage in 2003. The Parrothead nation voted Stan the Vice President of Margaritaville during Meeting of the Minds 2004.

The Palmetto Parrot Head Club, and the entire Parrothead nation, mourn Stan’s passing but we also happily raise a toast in his honor. He was a great friend and was the life of the party. There was never any doubt that Stan The Man was “a trip all by himself”. Sail on Stan.

SURFSIDE BEACH – A memorial service for Cecil Stanley “Stan” Bowen, 68, will be held Sunday at 3:00 pm at Powers Funeral Home. The family will receive friends from 2:00 pm – 3:00 pm at the Funeral Home.

Mr. Bowen passed away December 15, 2016. Born in Columbia, SC, on August 28, 1948, he was the son of the late Cecil D. Bowen and Frances S. Bowen. He retired from the State of SC and was the former president and member of the SC Parrot Head Club. Mr. Bowen was known as “Stan the Man.” He loved music and was an avid Jimmy Buffett fan.